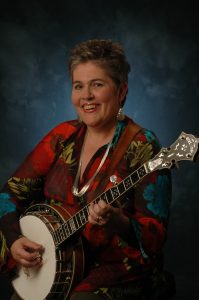 Join us on the porch for a special noon performance by banjo virtuoso Murphy Hicks Henry and her two sisters, Nancy Pate and Laurie Tanner. Henry and her husband perform as “Red and Murphy,” and Nancy (guitar) and Laurie (bass) played in the band for several years. The band has recorded six LPs and numerous CDs featuring many of Henry’s original songs, including the feminist number “I Ain’t Domesticated Yet.” Nancy is also a songwriter, and the group has recorded several of her original songs. According to Murphy, “We were all raised in North Georgia (Clarkesville), a family of five girls. Our father was the general practitioner there for 50 years, and our mother was a homemaker who turned Southern Baptist Church activist when we all left the nest.” The group will perform a combination of original songs, gospel tunes, and what Henry calls “some bluegrass standards that we have flipped the gender on.”

Murphy Hicks Henry is the cofounder (with her husband Red) of the Murphy Method, a forty-plus video series offering instruction on the banjo, guitar, mandolin, fiddle, and ukulele. She is also the author of Pretty Good For A Girl: Women in Bluegrass (University of Illinois Press, 2013). Murphy wrote a monthly column in the Banjo Newsletter for over twenty years before turning it over to her daughter, Casey.