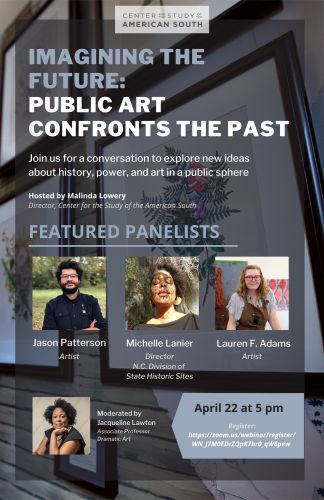 UPDATE: If you missed this conversation, it’s not too late!

Join us for a conversation about the creation of memories in public space and the power of art in the public sphere. We will be speaking with two artists – Lauren Frances Adams and Jason Patterson – whose work critically engages and analyzes items and symbols created in the nineteenth century. Using their art as a focal point, we will discuss the power of art to encourage the public to think differently about the meanings conveyed, then and now, in site-specific settings.

Introduction & closing remarks by Malinda Maynor Lowery, Professor of History, UNC-CH, and Director of the Center for the Study of the American South (CSAS)

Lauren’s wallpaper art, “In Faithful Remembrance of Cornelia Phillips Spencer, and to the Truth-Loving People of North Carolina”, is displayed in Love House, home of CSAS. This house was built in the 1800s and maintained by Cornelia Spencer, a white woman whose decor reflected her Southern ideologies. Lauren’s art puts Spencer’s own words back in a space that is now used in a completely different way.

Jason Patterson is an artist who shakes things up by literally and figuratively reframing history and the way it is often told. Jason was recently a fellow at the Starr Center for the Study of the American Experience at Washington College, where he exhibited his project about the Black history of Washington College and Kent County Maryland. He is currently a fellow at Chesapeake Heartland, a collaborative African American humanities project with the National Museum of African American History and Culture, and Washington College. His work focuses on African American history and highlights the role the past has in cultivating our current political and social conditions in the United States. Jason’s practice is heavily research-based and his portraiture is sourced from archived images such as daguerreotypes, film, newspaper clippings, and digital images. Jason investigates the different ways images structure how we visually comprehend our history and define our present.

Michelle Lanier is an AfroCarolina Folklorist public humanities professional, filmmaker and keeper of memory. This seasoned public humanities professional is the first African American director of the state’s 25 historic sites. Michelle unpacks the complex ways cultural and historic spaces tell stories, which stories they tell, and why. She was the founding executive director of the North Carolina African American Heritage Commission. Michelle has served on the faculty of the Center for Documentary Studies at Duke University since 2000. Michelle is the executive producer of the award winning film Mossville: When Great Trees Fall, which has been used by the United Nations as a tool to illuminate the stories of environmental racism in a Black town in Louisiana and the larger African Diaspora. Her work on inclusive reframing and liberatory placemaking includes her role as a commissioner of the Gullah Geechee Cultural Heritage Corridor.

Jacqueline E. Lawton is a playwright, dramaturg, producer, and advocate for access, equity, diversity, and inclusion in the American Theatre. She received her MFA in Playwriting from the University of Texas at Austin (Hook ’em Horns!), where she was a  James A. Michener Fellow. She participated in the Kennedy Center’s  Playwrights’ Intensive (2002) and World Interplay (2003). Her plays  include: Among These Wild Things, Anna K; Blackbirds; Blood-bound and  Tongue-tied; Deep Belly Beautiful; The Devil’s Sweet Water; Edges of  Time, Freedom Hill; The Hampton Years; The Inferior Sex, Intelligence;  Love Brothers Serenade; Mad Breed; Noms de Guerre; and So Goes We.

Currently, she is a Dramaturg at PlayMakers Repertory.  Lawton has taught classes on acting, directing, dramaturgy, movement,  playwriting, Shakespeare, and solo performance at Arena Stage, Duke  Ellington School of the Arts, Folger Shakespeare Library, the John F.  Kennedy Center, Round House Theatre, Shakespeare Theatre Company,  Smithsonian Associates, Towson University, University of the District of  Columbia, and the Young Playwright’s Theatre. Currently, she is an  Associate Professor in the Department of Dramatic Art at the University  of North Carolina – Chapel Hill.